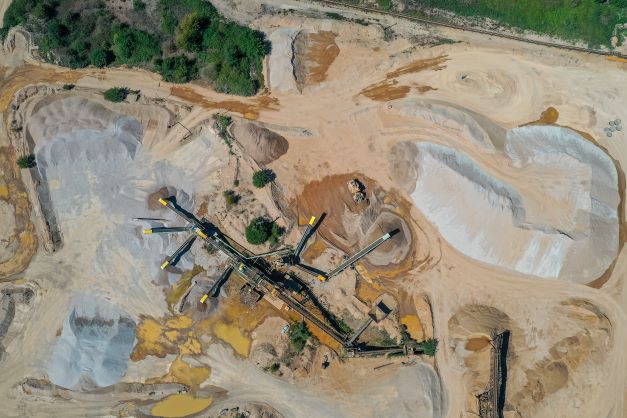 The vast majority of rubber used to manufacture industrial conveyor belts is synthetic. That is because synthetic rubber can be engineered for specific demands and is far more adaptable compared to natural rubber. This is vitally important when you consider the wide variety of working conditions and materials that they have to cope with. It is the quality of the rubber covers, in particular the ability to resist wear and tear, which has the biggest influence on the durability and operational lifetime of a conveyor belt. Sad to say, however, an enormous proportion of conveyor belts fail to provide a cost-efficient working lifetime simply because the rubber used to make them is of insufficient quality. The reason for this is that rubber forms some 70% of the volume mass of a conveyor belt and more than 50% of the cost. With most conveyor belts being sold on the basis of the lowest selling price rather than performance and durability, the rubber is therefore the prime target for minimising costs. The outward appearance may seem perfectly okay but how can you tell if the rubber is poor quality?

A surprising way of identifying poor-quality rubber is sound. Belts with good-quality rubber covers tend to run appreciably quieter than their lower-grade counterparts because of the quality of the ingredients used to make them. For example, a key component contained in every black rubber conveyor belt is carbon black. It makes up around 20% of a typical rubber compound and good-quality carbon black is an expensive commodity. Carbon black plays a vital role in prolonging belt life by helping to conduct heat away from the surface area of the belt, thereby reducing thermal damage. It also acts as a reinforcing compound. Belts offered with significantly lower prices are virtually certain to contain carbon black which is of a much lower quality because it has been produced much more cheaply such as by burning scrap car tyres for example. Other methods used to minimise rubber costs include the use of recycled rubber of highly questionable origin and cheap ‘bulking’ fillers such as chalk, which are used to replace part of the more expensive rubber polymers. The end result is that the rubber is more rigid and less flexible, causing the belt to emit a constant loud rumble. There is also a tendency for the belt to slip, causing loud squealing sounds.

In contrast, higher-quality rubber contains much higher proportions of top-grade polymers and premium-quality carbon black. As a consequence, rather than being rigid, the rubber is much more elastic, which helps to reduce its rolling resistance because it ‘conforms’ more easily to the drums and pulleys. This means that it requires less drive power and makes less noise because the sound is dissipated as the belt surface passes over the rollers. Good quality rubber also has more grip so it is less prone to slipping under tension at the head. A perfect example of this was discovered recently by a large quarry in the UK who, after replacing their low-grade imported belting with belts produced by Dunlop Conveyor Belting in The Netherlands, found that the noise level of their conveyors dropped by more than 50%.

As I said earlier, rubber usually forms at least 70% of the volume mass of a conveyor belt and more than 50% of the cost. When there is a big difference in the price of one conveyor belt and another, invariably the best tell-tale sign of all because the price reflects the quality. If you are using low-price belts, especially ones originally manufactured in Asia, the only way to establish the difference is to actually invest in a premier-grade belt. What you are almost guaranteed to find is that the ‘more expensive’ high-quality belt is not only quieter it also requires less maintenance, fewer repairs (including splice repairs) and will most likely outlast a cheap import belt four or five times over. They cost much, much less in the long run.

Authors note: Please be aware that the level of noise emitted by a conveyor can also depend on other factors such as the quality of the infrastructure, maintenance, type and condition of other integral components such as rollers and/or general operating conditions. Consequently, a reduction in noise level cannot be guaranteed simply as a result of changing your belt to a premium quality band such as Dunlop. For more advice on this subject please consult an experienced application engineer.