As any big brand owner in the world will tell you, impersonation, counterfeiting and plagiarism are a constant problem. The higher the level of brand recognition and automatic association with premier quality, the higher the chances that an unscrupulous manufacturer somewhere will try to take advantage. Growing over 10,000% in the last two decades, counterfeit products exist in virtually every industry sector. Even now, it seems, in the world of industrial conveyor belting.

Coinciding with that time, the biggest single source of rubber belting imported into Europe is from China. As with the approach they use for virtually every other market, the strategy has been based on mass volume manufacturing at a barely acceptable (and often unacceptable) standard of quality at hugely discounted prices. Much of the European-based conveyor belt manufacturing capacity has disappeared as a result, creating an unhealthy reliance on low-grade imports. Indeed, with only one exception, European manufacturers now supplement their production with imported belting.

That one exception is Netherlands-based Dunlop Conveyor Belting who, despite the best efforts of their competitors in Asia, has continued to prosper thanks to an unwavering market strategy of selling premier quality belts that are exclusively manufactured in their own facilities.  The ‘unique selling proposition’ that they use in the face of the extremely low prices being offered by Chinese manufacturers and their importers is one of ‘lowest lifetime cost’. To support their arguments, Dunlop provides a wealth of technical evidence based on laboratory testing and real-life examples in the form of numerous case studies that demonstrate how their belts can quite easily last for up to four or five times longer than low-grade import belts. Very importantly, Dunlop places considerable emphasis on being contactable and accountable for their products, which is an often under-estimated advantage, together with the reassurance of a 24-month warranty.

It has been a hard and long-running battle but in recent years there have been strong indications that the market is turning away from low-grade import belts and realising the far greater value of using premium, long-life belting. As if in answer to this trend, one Chinese manufacturer, Zhejiang Fuda Rubber, has stepped up the level of dishonesty by blatantly and audaciously claiming to be a manufacturer of Dunlop conveyor belts. To support this deception, they have actually adapted a Dunlop Conveyor Belting quality guarantee certificate by adding their name and logo at the top and their ‘signature’ and stamp and company details at the bottom.

It seems hard to believe that something like this could happen but should we really be surprised? After all, 70% of all counterfeit goods seized globally come from China. The Chinese often joke that in China, “everything is fake but your mother”. It may be a joke to them but it is certainly no joke to honest manufacturers such as Dunlop and indeed end-users that have been tricked into buying what they believe to be Dunlop quality belts, only to discover to their cost that they bear no comparison in terms of performance, safety and longevity.

Andries Smilda, Dunlop Conveyor Belting’s sales & marketing director, is understandably outraged and equally determined to turn the tables on Zhejiang Fuda Rubber. “We will not stand by and allow this kind of cheating and deception to take place. Apart from anything else, we will use this example to highlight the lengths that Chinese belt manufacturers will go to in order to sell their belts to unsuspecting customers. If anyone in the market was unaware of their dishonest practices we will now do all we can to make sure that they know otherwise” 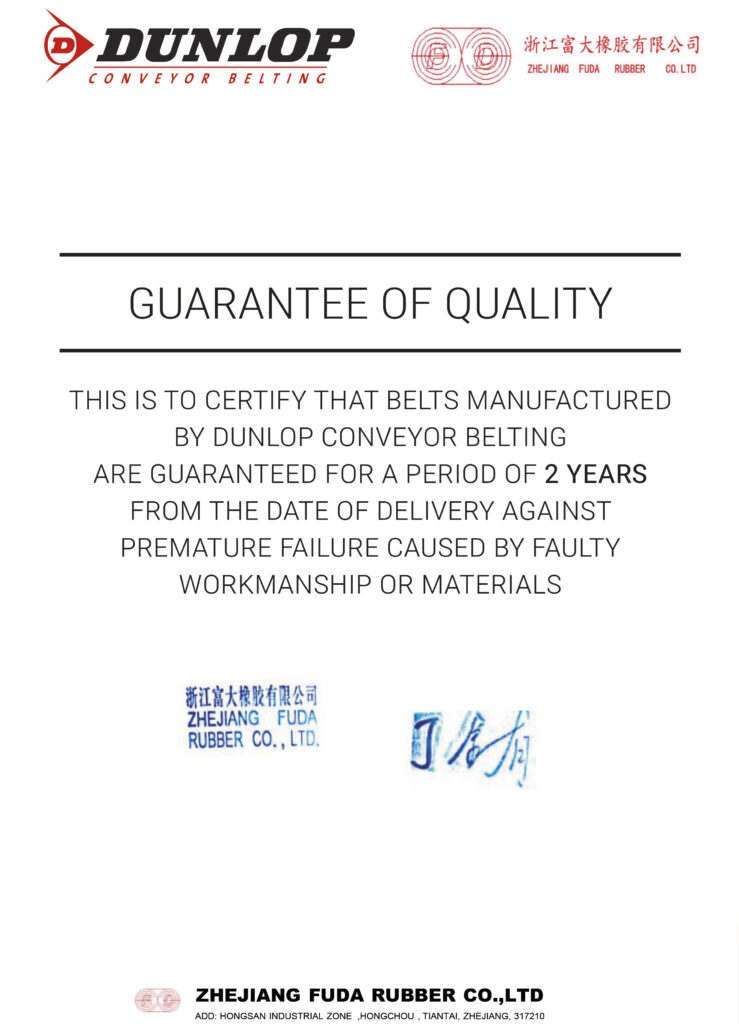