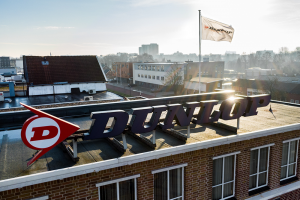 Company of the Year Award

At a time when so many countries and businesses are in economic turmoil due to the COVID 19 pandemic and there is so much talk of closures and job losses, it makes a refreshing change to find a company that continues to find positivity amongst all the negativity. As a result, Netherlands-based Dunlop Conveyor Belting has deservedly been recognised as this year’s Business & Industry Today ‘Company of the Year’ award winners. 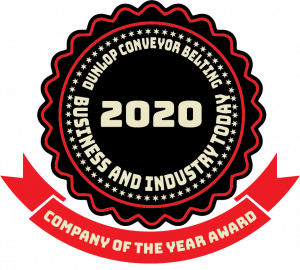 Next year, the company will be celebrating 100 years since its establishment in 1921 in Drachten, where it still operates to this day. Originally, the company manufactured cotton reinforced leather transmission belts. In 1945 it began to manufacture rubber industrial conveyor belts and has never looked back since.

One of the advantages of being so long-established and in one location is that the traditions of skilled workmanship are naturally passed down over the generations. Ultimately, a tradition of ‘quality excellence’ became an integral part of the company’s ethos and remains so until this day. Its production and technical workforce are widely recognised as being amongst the most highly skilled and experienced in the industry. As a natural consequence, its products are equally recognised as being the world standard for quality, reliability and longevity of use.

There can be no doubt, that the biggest threat to their future, and indeed the future of conveyor belt manufacturers throughout Europe, has been the unprecedented growth of imported belting from Asia. For the past twenty years or so, imports of low price, low-grade conveyor belting from Asia into Europe have grown to such an extent that European-based conveyor belt manufacturing now faces possible extinction. By far the biggest single source is from China where imports grew by some 48% between 2017 and 2019. Ironically, the way in which Dunlop Conveyor Belting has risen to this challenge is perhaps the single biggest reason why the judging panel felt them be such worthy winners of the ‘Company of the Year’ title.
Rather than follow in the footsteps of other European-based belt manufacturers, Dunlop has categorically refused to compromise on quality. And again, unlike their competitors, they have also flatly refused to import low-grade belts from Asia to re-sell under their own brand name at low prices.
In fact, their primary marketing stance is to actually emphasise this as a key ‘differentiator’ by continually pointing out that they are the only major European manufacturer to exclusively manufacture all of their belts themselves in Europe using their own production facilities.
As a consequence, this is the main reason why they are able to produce belts of such a high quality and which provide the longest (most economical) working life because they have 100% control over every element of the production process and all of the materials that are used in that process.

Another part of their winning formula is the clear understanding within the management of the company that to stand still is to go backwards. Innovation is a word much-used by marketing people all over the world. But how often is there real evidence of true innovation? In the case of Dunlop, innovation really does seem to be just as much a part of their culture as their ‘nothing but the best’ quality ethos. From creating the very first fire-resistant belts through to heavy-duty application belting such as their unique Dunlop UsFlex belt, they seem determined to take on the toughest possible challenges.
One such challenge was how to overcome the age-old dilemma where even the strongest, heaviest conveyor belts can be ripped, torn or punctured by heavy, sharp materials or foreign objects. Although Dunlop engineers had solved the problem of rapid abrasive wear and cutting and gouging of the belt covers long ago, the real challenge was to design a ‘problem solver’ belt that could handle really aggressive treatment while at the same time be priced economically.

What the Dunlop engineers and technicians did was to forget convention and go back to the drawing board. What they created was a genuinely unique, super-strength, ‘breaker weft’ construction single-ply belt. The whole concept was based on an amazingly tough patented polyester fabric used as the carcass of the belt that is exclusively made in the in-house fabric weaving facility run by their sister company in the USA. The result was a belt, named Ultra X, that has more than 3 times greater longitudinal rip resistance and up to 5 times better tear resistance and a far superior resistance to impact compared to conventional 3-ply or even 4-ply belting. Arguably, the cleverest part of all was that they were also able to price Ultra X very competitively thanks to an extremely ‘production-friendly’ design. With more and more customers finding that Ultra X is regularly achieving more than double the normal operational belt life expectancy, Dunlop’s unquenchable thirst for innovation continues to pay dividends.

Dunlop is clearly proud of the fact that they have always led the way when it comes to adherence to the European Union’s REACH (Registration, Evaluation and Authorisation of Chemical substances) regulation EC 1907/2006, concerning the use of potentially dangerous chemical substances during the manufacturing process.
Dunlop’s green credentials are certainly worthy of note, especially considering the fact less than 10% of used rubber conveyor belts are currently recycled, which is largely due to the unavoidably high levels of synthetic fabrics and steel cords that they contain. Dunlop argues that manufacturing one high-quality belt that quite typically lasts longer than two low-grade belts effectively halves the manufacturing carbon footprint. At the same time, it also halves the number of chemicals, including those with category 2 carcinogenic classifications that would otherwise be ultimately discarded as unrecyclable waste.

Chief Operating Officer, Jan Bockstall, sees the ‘Company of the Year’ award as a welcome recognition of the efforts being made by everyone in the business. “We are very proud to receive this award. There can’t be many companies, especially in Europe at the moment, that are expanding their production as well as developing new products. It’s a very exciting time for all of us.” 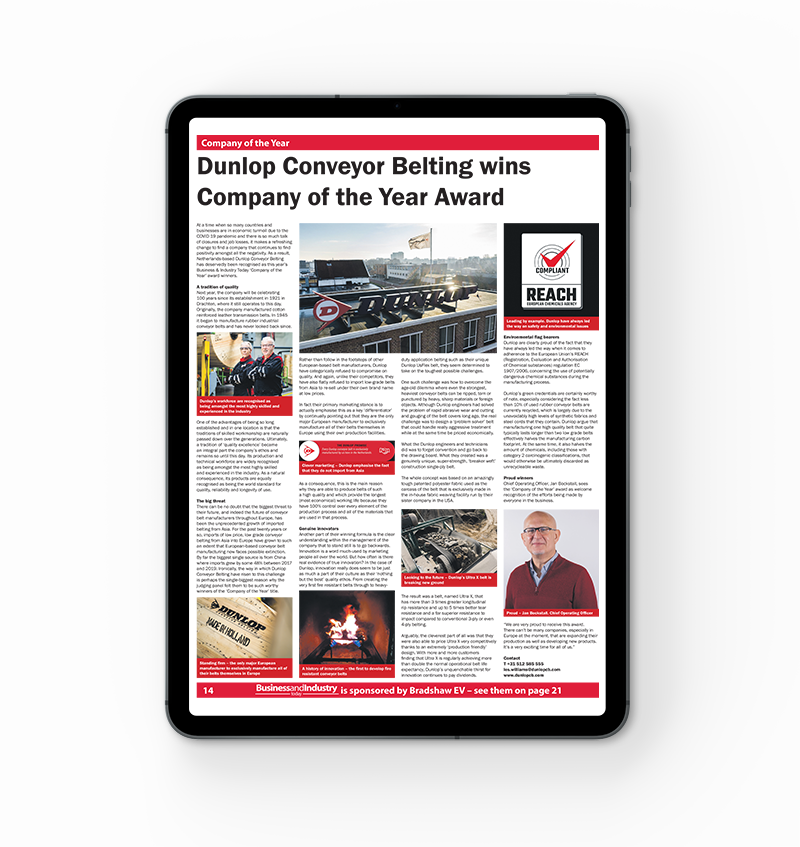 Read the article in .pdf