There are three basic types of belt edge – moulded, sealed and plain cut edge. The importance of which type to use is vastly underrated. Choosing the wrong type costs many conveyor operators a great deal of wasted time and money, especially when specifying that the belt must have full moulded edges even when there is no practical or technical benefit. 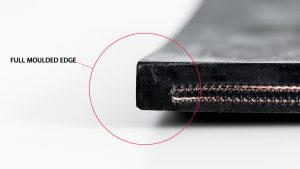 Many years ago, moulded edges were the norm for multi-ply belts because cotton was being used as the reinforcing fabric. Having a moulded edge was therefore essential in order to prevent moisture penetrating the cotton fabric and causing it to rot. However, since the inception of synthetic belt carcasses using polyester and polyamide, this problem effectively no longer exists so belts with cut and/or sealed edges are now the most commonly used belt edge type. Despite this, many buyers continue to needlessly specify moulded edges even when they are not needed.

Moulded edges can only be created when a belt is manufactured (assembled and vulcanised) to exact width, which means that the belt has to be made to order. During the calendaring of the belt, a small strip of un-reinforced rubber is attached to the side of the carcass. The strip is formed as an integral part of the belt during the actual vulcanizing process. This typically creates between 5mm to 15 mm of unreinforced rubber on the belt edge. Moulded edges do not provide any structural advantage. In fact, they can be susceptible to damage because they can very easily be torn off if the belt wanders off-track for any reason. 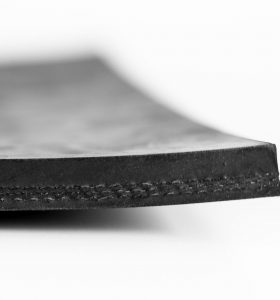 The alternative and most commonly used belt edge type is the ‘cut & sealed edge’ or simply ‘sealed edge’. The majority of fabric multi-ply belting is held in stock in a range of the most commonly used standard widths by manufacturers, distributors and traders. To maximise the efficiency of production and minimise cost, these standard width stock belts are usually made as wide as the manufacturing machinery will allow. These are known as ‘slabs’ which are then cut to narrower widths. The belt edges are then sealed during the slitting process.

Belts with cut edges that are not sealed are slit using conventional cutting knives. We do not recommend the use of unsealed (raw) cut belt edges. At Dunlop, we automatically create belts with sealed edges by using special cutting knives that rotate at extremely high speeds. The heat created by the friction of the rotating knives melts the carcass fibres and a small amount of the rubber on the edge of the belt, effectively creating a seal. Technically speaking, this is a ‘cut and sealed edge’ but is most commonly referred to as a ‘sealed edge’. Having a sealed edge prevents moisture from being drawn into the carcass from the edge by capillary forces. Although the synthetic carcass fibres are hardly affected, moisture can ultimately cause vulcanising problems when making splice joints. Having a sealed edge therefore enables a belt to be used in wet conditions and makes it better suited to outdoor storage.

In the case of steelcord belting it is necessary to use moulded edges in order to prevent moisture penetration into the carcass which, over time, would cause the steel to corrode.  This also applies to steel reinforced fabric ply belts. Belts with more specialised cover grades (such as fire-resistant for example), hi-performance carcass constructions or simply a non-standard width requested by the customer that therefore have to be custom-made will also naturally have moulded edges.