Changing for the better. How UsFlex handles the toughest and harshest environments imaginable.

In many industries, especially mining, even the thickest and heaviest of conveyor belts such as a 5-ply belt can be ripped or torn by large lumps of heavy, sharp rock, either falling from a height or becoming trapped. It is not uncommon for a belt, even one fitted with ripstop breakers, to be destroyed within a matter of weeks or months. In some cases, a trapped object can cause irreparable damage before anyone has a chance to stop the conveyor. This is, of course, a problem well known to a great many mine operators. When faced with the need to repeatedly repair damaged belts and, ultimately, to prematurely replace a barely worn belt, the most obvious answer would seem to be to fit an even heavier belt with even thicker cover.

However, the reality is that this is very rarely the best solution. In fact, having increasingly heavy, thick belts can lead to other operational problems. In truth, the real answer to impact and ripping problems is the same that applies to virtually all other conveyor belt problems, which is to fit belts that have a carcass that is specifically designed for the purpose and which is protected by top quality, high-performance rubber covers. The dilemma for operators is that from the point of view of the vast majority of belt manufacturers, as well as the vulcanizing companies that supply, repair and fit the belts, frequent repair and replacement makes for good business. Supplying conveyor belts that provide a considerably longer operational lifetime is not really in their best interests. Fortunately, not all manufacturers and service companies think that way. The fact is that conveyor belt technology has advanced quite significantly, especially in recent years. Today’s belts, even those that carry the heaviest, hardest and sharpest materials, should be able to handle such aggressive materials and yet still run for far longer than they currently do. So, the technology and the solutions are out there. You just have to know what to look for and where to look. So we asked one of the most respected names in conveyor belting, Netherlands-based Dunlop Conveyor Belting to do just that. Here, director of development, Dr. Michiel Eijpe, dispels some of the outdated misconceptions about heavy duty belting and throws new light on a unique conveyor belt construction that has proved remarkably successful in some of the toughest and harshest environments imaginable… 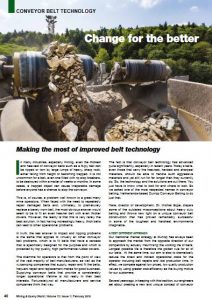